In the automotive industry laboratory testing is common place for a number of reasons, including standardization and repeatability. On face value this would seem to be a good idea in the case of emissions testing: With all the variables encountered in a driving cycle, standardization should produce repeatable mean-results.

Nonetheless emissions testing using the New European Driving Cycle (NEDC) has long been questioned, as to both the validity of the results obtained, and their correlation to real world emissions.

In a report released in May 2013 the non-profit International Council on Clean Transportation (ICCT) found “real-world” carbon emissions for new cars based on fuel consumption, to be about 25 percent higher on average than carmakers claim. This compared to 10 percent a decade ago. 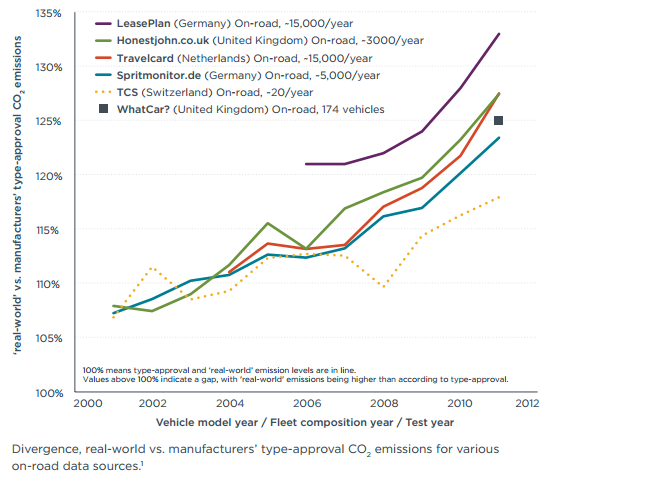 This growing gap between reported efficiencies and actual driving results cuts in half the expected benefits of Europe’s passenger vehicle CO2 regulations, & creates the risk that consumers will lose faith in type-approval fuel consumption values.

Even before the release of these findings, legislators in the European Parliament had proposed the introduction of a tougher testing procedure by 2017: Although some EU member governments have requested a delay until

In order to achieve real CO2 emission reductions, it is of great importance to ensure that reductions in CO2 emissions registered in the laboratory during the type-approval test are also realized under “real-world” driving conditions.

When the first test procedures and the New European Driving Cycle (NEDC) were introduced back in 1970, the purpose was mainly to reduce pollutant emissions. The driving cycle was not necessarily developed as being representative of real-life driving; it was merely an abstract representation of some everyday driving conditions. This is very different from what is required today. 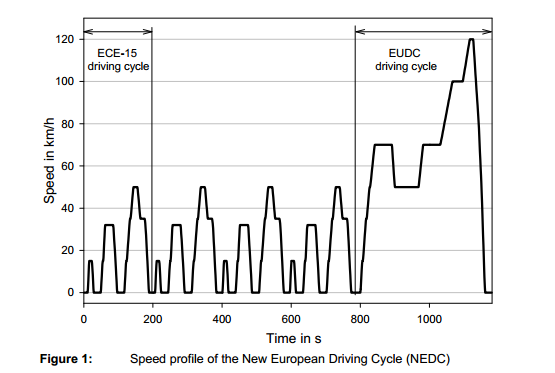 RDE seeks to rectify the shortcomings of the current procedure/ driving cycle by ensuring “Real World” parameters are used.

Officially scheduled for introduction with Euro 6 in 2017, there are two possibilities under consideration:
Random Cycle testing.

At the same time the current NEDC is not representative of real-life driving conditions but is rather a stylized driving pattern with moderate accelerations, constant cruising speed, and many idling events.

Using the information from the WLTP data base a more realistic driving cycle can be determined. 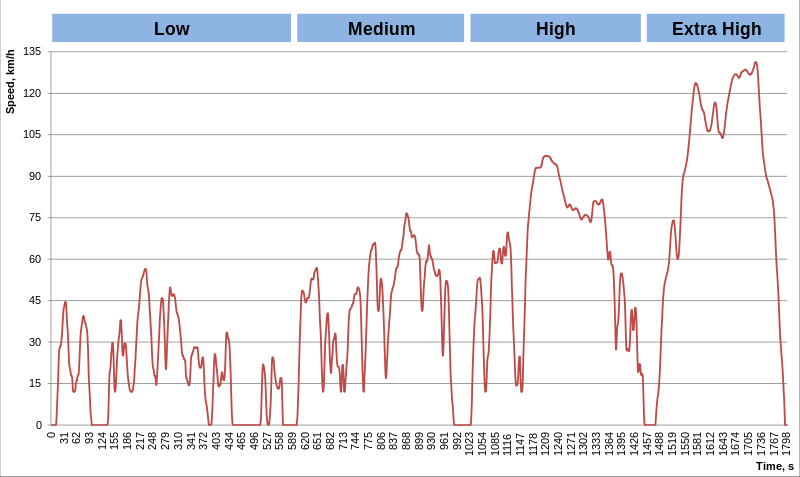 In striving to accurately replicate “Real World” testing the road load in respect of aerodynamic drag, and the rolling resistance needs to be taken into account.

Fortunately these differences can be accommodated by modern chassis-dynamometer control systems, but require as an input, the actual resistance forces determined by road tests.

This “road-load determination” test is already part of the type-approval test procedure and is most commonly done by coasting a vehicle from high speed to almost zero on a straight and flat test track with the clutch disengaged. The resistance force can then be calculated using the deceleration and mass of the vehicle.
The current test procedure, determined in regulation ECE-R83, does not adequately address the following:

1)    Gradient of the test track – for the road-load determination it is important to have a level test track so as not to bias the results. Though there are limits on the maximum allowed slope of the track, there is still potential to influence the results even if the tests are required to be performed in both directions. Furthermore, the method used in the NEDC calculation to average the results in both directions contained a minor error that reduced the resulting road load. The proposed procedure will correct the error while adding further restrictions to the longitudinal slope of the opposite straights of the test track.
2)    Vehicle selection – the road-load determination procedure is normally performed at a time when the vehicle being type-approved is still a prototype. Currently, there is no adequate mechanism in place to verify whether this prototype vehicle is the same as the eventual production vehicle. Hence, some vehicle body options may not be fitted to the prototype; or tyres with lower rolling resistance might be used, etc. Also, the manufacturer will usually test the vehicle version with the lowest weight and fewest options. Under the proposed procedure the influence of vehicle options on road load will be calculated or measured and corrected accordingly.
3)    Vehicle preparation – the current test procedure allows a degree of flexibility and tolerances in the preparation of the test vehicle: Such as pushing back the brake pads to avoid parasitic drag, realigning the wheels, improving aerodynamic performance, increasing tyre pressure to lessen rolling resistance, etc. These issues are addressed in the proposed procedure. One example is the requirement to demonstrate braking of the vehicle before the coast-down to ensure the brakes are in a representative condition.

There are other parameters, included in the NEDC test procedure, which are not truly representative of “Real World” driving conditions. A good example of this is the temperature in the test cell and the area where vehicles are kept prior to the laboratory tests (heat soak area): To represent real-life conditions, these should be kept at average European outdoor temperatures (about 10°C). Yet, for practical reasons, it was decided for the NEDC regulation to specify a temperature of between 20°C and 30°C, which is much higher than the European mean.

The alternative to these laboratory simulations is a “Real On-road” measurement of emissions. In order to accomplish accurate, repeatable results a Portable Emission Measurement System (PEMS) is proposed.

Using PEMS it’s possible to verify the performance of emission control technologies under a wide spectrum of normal operating conditions as well as being a suitable platform for testing emissions of novel fuel/ engine/ after-treatment/ powertrain technologies and hybrid vehicles.

Based on testing that proves the PEMS system to be reliable and capable of providing accurate emission measurements, the RDE-LDV meeting held in Brussels in Jun 2012 declared that PEMS testing will definitely have a role to play when assessing vehicle emissions performance in future.

In addition, other effects such as road gradients and wind may strongly effect on-road emissions. Furthermore, PEMS on-road emissions tests conducted by manufacturers with one diesel vehicle on one single test route have resulted in average NOX emissions that deviate from one another by a factor of five.

This observation suggests, on the one hand, that the emissions control system of the vehicle may not function properly under on-road driving conditions. On the other hand, it highlights the need to define suitable boundary conditions that ensure on-road emissions testing is conducted within the agreed ranges of normal vehicle operation and use.

The initial findings of the European Commission JRC are that:
•    Both test procedures are technically feasible.
•    PEMS on-road emissions testing may cover a wider range of driving and ambient conditions than random-cycle testing in the laboratory, and may thus be regarded as potentially more effective in ensuring that the pollutant emissions of a wide range of vehicles are effectively limited during normal vehicle operation. However, the implementation of PEMS on-road emissions testing faces practical challenges, including the currently limited availability of PEMS equipment and know-how, constraints on performing emissions tests due to the geographical location of test sites, traffic conditions, and seasonal climate variations, as well as open safety issues.

•    Random-cycle testing is more effective than emissions testing with the NEDC but may potentially cover a smaller range of driving conditions than on-road testing with PEMS.

Specific concerns arise from the relatively short test durations, the potentially insufficient coverage of severe acceleration for high-power vehicles, and the limited ability to simulate micro-transient driving. However, random-cycle testing in the laboratory also presents advantages over on-road testing in that it allows:
(i) using established analytical equipment of high accuracy and
(ii) repeating and reproducing individual emissions tests under defined conditions. The latter characteristics may enable manufacturers to better validate emissions results as compared to PEMS testing on the road.
•    Random-cycle testing will likely be detected and may allow the application of defeat strategies to a larger extent than PEMS on-road testing does.
•    Random-cycle tests can accurately be repeated and reproduced while PEMS on-road testing shows a considerably lower repeatability and reproducibility. The resultant uncertainties should be accounted for when defining concrete not-to-exceed emissions limits for type-approval and in-service conformity testing.
•    The implementation and running costs of both procedures depend to a large extent on the definition of the system boundaries, which have not yet been agreed upon.
•    Both procedures can be used for virtually all vehicles.

Limitations on the use of PEMS may exist for some two-seaters and vehicles with unconventional tail-pipe configurations.

The test procedure for type approval, in-service conformity testing and potentially surveillance testing, should be finalised by 1st September 2017, at the latest.

Both random-cycle testing and PEMS on-road testing as complementary test procedures, will continue to be developed: With the Joint Research Centre taking the lead in developing the PEMS reference procedure, while industry develops the random cycle.

Until the drafting of the complementary RDE test procedure, vehicle testing both in the laboratory and on the road will be undertaken.

The present assessment is subject to uncertainty because of the running costs, as well as the overall effectiveness of the two proposals relying on the definition of concrete boundary conditions. These definitions have not yet been agreed to.

As concluded by the JRC report in their findings on Real Driving emissions: “These will have to accommodate: (i) more stringent Euro 6 emissions standards from 2014 onwards, (ii) the application of ‘not-to-exceed’ emissions limits to a wide range of operating conditions, and (iii) a lower repeatability and reproducibility and thus a greater degree of randomness in emissions testing.“

In the final assessment, EU regulation of vehicle CO2 emissions should discourage investment in technologies that do not perform well under real-world conditions, should minimize the exploitation of flexibilities in testing procedures, and should spur innovations that will lead to CO2 reductions in reality as well as in the laboratory.

Can Hydrogen Injection save the diesel engine?

Are Hydrogen fuel-cell cars being overlooked?