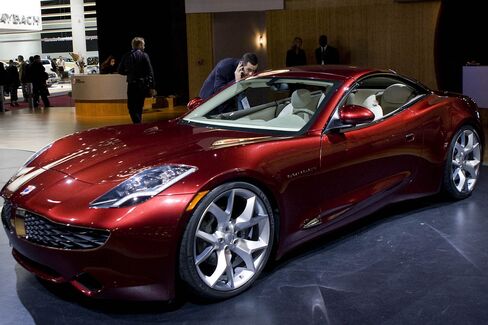 Henrik Fisker has re-launched his namesake company, he told Bloomberg.

The charismatic Dane said his newly minted Fisker, Inc. will showcase a premium, all-electric vehicle in the second half of 2017. On a private phone call Monday he called it a spiritual successor to the Fisker Karma electric car he launched in 2012.

We have really been working in stealth mode, Fisker said. For the last two years I have been looking at battery technologies and wanted to see if there was something that could really give us a new paradigm. We had the strategy of developing the technology as fast as possible without getting tied down to a large organization, which would hold us back. Now we have the technology that nobody else has. And there is nobody even close to what we are doing out there.

The designer credited with creating the BMW Z8, Aston Martin V8 Vantage and Aston Martin DB9 saw his Fisker Automotive Inc. go through a structured bankruptcy auction in February 2014, where Wanxiang Group bought certain assets, excluding the Fisker brand. Fisker, Inc. is Henrik Fiskers new entity, and Fisker Nanotech is its battery division, a new private corporation based in northern California. Fisker is the Chairman and CEO of Fisker Inc; Jack Kavanaugh is the chairman of Fisker Nanotech.

Details about the new car and specifically the new technology remain scarce, but Kavanaugh said he hopes they will achieve unparalleled range and battery life thanks in part to a new packaging method and lightweight materials in the battery pack.

The technology emanates from several professors from UCLA who have been working on energy storage, Kavanaugh said, noting that the batteries will contain some lithium but not be the conventional lithium-ion batteries found in things like the Tesla Model S. We have already developed prototypes that you wont see anywhere else.

The new team claims the new Fisker model, which has yet to be named, will deliver a more-than 400-mile driving range and possess an industry-leading battery life that will potentially match the life of the vehicle. The plan is to develop it at Fisker Nanotech’s prototype- and manufacturing facilities in northern California, Kavanaguh said. And itll have more rear legroom and headroom than any of its closest competitors.

Fisker declined to describe much of what it will look like; expect to see images of it by mid-next year.

It will definitely be something that when you see it, it will look completely different, Fisker said. He did not specify whether it will use the chassis or other components from the Fisker Karma or VLF Force 1. It will be sporty and spacious. And youve got to make something look beautifulthere is no excuse for making an ugly car, even with new technologyso it will definitely have some of my signature elements.

If all goes according to plan, the car will also lead the way for Fisker Inc. to develop and produce a second, mass-market, affordable electric vehicle in the subsequent years after the launch of the initial car. That one will retail for less than $40,000 but still have a longer electric range than competitors, Fisker said.

Fisker, who lives in Los Angeles, said the ultimate goal of creating the new battery technology is to sell it to an OEM (original equipment manufacturer). The idea is to move the entire auto industry, as it were, from VHS to DVD mode, he said.

Fisker will be doing all of the testing, and that gives us a huge advantage, but that doesnt mean we will be sitting on [the technology] alone, he said. We will also be looking at selling this technology to other OEMs because if you want to reach true mass market potential we need probably eventually an OEM. We are having very superficial discussions right now with a couple of them.

Meanwhile, Fisker continues his imposing production schedule in many fields including roles as head of design and product strategy at VLF Automotive, the company he founded with Bob Lutz and Gilbert Villarreal in January 2016; and as CEO of HF Design, a design and innovation company that makes products for automotive, lifestyle, home, education and smart devices. The company launched a 164-foot super yacht series with Benetti Yachts earlier this year.