As farfetched as Sergio Marchionne’s dream of a merger with GM seemed, even stranger things may be happening in the industry: Mergers between traditional OEMs and tech companies, such as Google and Apple, could be on the wishlist of some of the major self-driving car players.

But while Apple’s CEO Tim Cook is rumored to be setting up an Apple car research facility in Berlin, consumers feel more comfortable with a self-driving car created through a partnership between a traditional automotive manufacturer and a tech company.

In a survey conducted by the World Economic Forum and Boston Consulting Group 6,000 respondents from 10 countries were questioned about their preferences regarding self-driving cars; 46% said they favored a traditional automaker to build the vehicle, while 69% of these said they would prefer a product coming from an auto-tech joint venture.

While Apple hasn’t divulged anything about its automotive plans, the company typically goes its own way when developing new products. In contrast, Google, which has been testing a fleet of autonomous cars for six years, has repeatedly expressed interest in partnering with an auto manufacturer for its self-driving car rollout, which may happen in the next five years. On the automotive side, companies such as Ford, Audi, and Mercedes-Benz have been steadily ramping up their in-house self-driving car tech and teams.

Of those polled by WEF/BCG, who hailed from countries ranging from the U.S. to the United Arab Emirates, respondents in France, Germany, and Japan reported the highest levels of trust in traditional auto companies making self-driving cars, ranging from 50% to 58%. In the U.S., only 32% of respondents said automakers would be the ideal manufacturer of such vehicles. 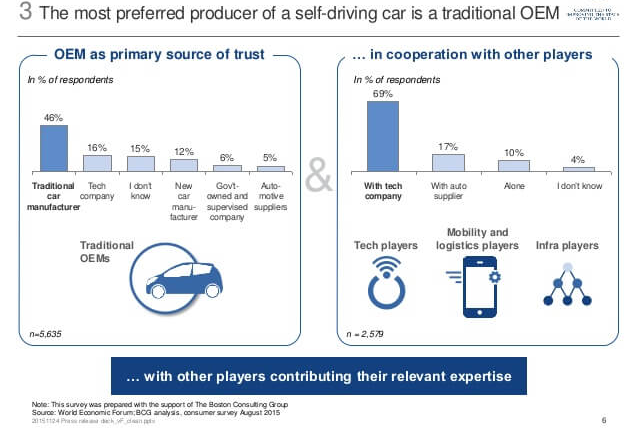 “This survey is reassuring news for traditional automotive companies,” says Nikolaus Lang, a BCG senior partner who worked on the research. “Our results indicate that consumers primarily expect OEMs (original equipment manufacturers) to play a leading role in the rollout of self-driving vehicles, with technology players such as Apple and Google contributing their relevant expertise.”

Google has the edge.

While Google has the highest profile of all autonomous car producers, many industry observers still see the traditionally tech orientated company as a bit of an oddity as a fully-fledged entrant into the motor industry. Just looking at the design of the G self-driving cars I can’t help but think of a kid’s bedtime story – they just don’t look like cars!

But the truth is that Google, having launched its Self-Driving Car Project back in 2009, has the jump on all other entrants! Data recently collected from the California Department of Motor Vehicles, by The Atlantic, revealed that out of the 11 companies with test permits for self-driving cars in the state, Google is above and beyond its competition with 73 permits, as of March 1, 2016. The manufacturer with the next-most test authorizations for autonomous vehicles in California? Well, that would be Tesla with eight.

Interestingly (Although not unexpectedly) of the top three permit holders only one, Tesla, can be considered a “traditional” automotive OEM. The company has recently added an Autopilot function to its latest software update, allowing the vehicles to remain in a lane as well as change lanes safely when the driver signals.

But does this mean anything in the race to bring self-driving cars to our roads? I don’t think so. I don’t see this technology any different to, say, the development of EFI or ABS: This technology was developed by suppliers such as Bosch, Continental, and Delphi and adopted by OEMs.

Why should Google, Apple or Cruise Automation be viewed any differently? As a system supplier, the R&D costs can be focused on the core competence of the company. A motor car is incredibly complex, with thousands of components that have to be developed and then brought together as a multitude of systems to produce a functional car.

Furthermore, these systems have to meet safety and regulatory requirements, that often vary from region to region; and once this is done the vehicle needs to be sold and serviced through a dealer network.

Is Google or Apple really capable of this? Do they have the capital or people to take on the established OEMs within the next twenty years?

Will the OEMs squeeze out the early-adopters?

However, I think the real question here is whether the traditional manufacturers are going to, buyout or even squeeze out the smaller early-adopter tech companies?

GM recently purchased Cruise Automation for an amount rumored to exceed $1 billion: The three-year-old company is best known for having created an aftermarket “kit” that allows buyers to convert Audi A4 and S4 vehicles into autonomous cars for highway driving.

Clearly GM didn’t lay out that kind of money for a license to the hardware and is more likely to be interested in integrating the technology into future products. The acquisition follows GM’s recent move to create a team dedicated to the development of self-driving car technology within the company. The team of engineers and executives, led by Doug Parks, is responsible for all critical systems in the vehicle, including electrical design, controls and software, and safety integration.

With most OEMs working on ADAS with traditional suppliers they already have most of the building blocks needed to create a fully autonomous car. But assembling these into a functional platform is going to require lots of expensive R&D into systems that Google already has already developed. So, why not continue to dabble in ADAS, get a feeling for the difficulties of fully autonomous functionality and then hand over the heavy lifting to a specialist company that has already done much of the development, and built up a supplier base for unique components?

As Marchione has pointed out on several occasions, the escalating costs associated with complex new technologies coupled to reducing model cycles is seriously challenging many OEMs’ profitabilities. One way of managing these challenges is to work with specialist suppliers.

Should Google position itself as a Tier one supplier of this technology, it would be well placed to capture a fair chunk of the market which is projected to be $25 billion by 2030. For Google, there would be several benefits, including:

• An increased takeoff for their systems
• Reduced cost/ unit, driven by the increased volumes gained by supplying multiple OEM’s
• Technology would remain their own

This last point may, in fact, be the spoke in the proverbial wheel! Would OEMs be comfortable with a supplier being in control of such a critical high-value system that forms the backbone of the vehicle? What about liability in the case of an accident resulting from the autonomous systems – would the OEM be held responsible?

I think at this time, the best the tech companies can hope for is that they become systems suppliers – at worst, as with many early adopters, they could be sidelined as the dominant OEMs develop their own technology better suited to the motor vehicle.

Your next car will be hacked. Will autonomous vehicles be worth it?